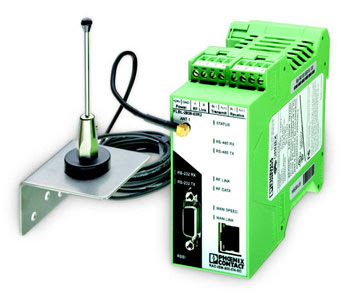 Phoenix Contact has added the RAD-ISM-900-EN-BD/B (also known as TWE-Basic) to the Trusted Wireless Ethernet (TWE) radio family. This new TWE-Basic radio offers many of the same features that are in the standard TWE product, including TWE 2.0 technology. The TWE radios operate at 1 watt in the 900 MHz spectrum, offering over-the-air data rates up to 500 kbps, and incorporate up to 256-bit AES encryption.

The TWE-Basic is a “slave-only” device, so it must be used in conjunction with a standard TWE or TWE-BUS radio acting as the master. A system can be constructed consisting of TWE-Basic radios as the slave units and the standard TWE or TWE-BUS as the master/repeater radios, reducing the overall cost of the network.
Features:
Phoenix Contact TWE-Basic Trusted Wireless Ethernet Radio
Phoenix Contact Technical Datasheets