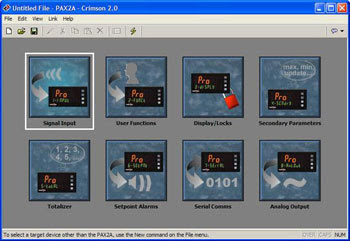 The latest release of Red Lion Controls’ Crimson 2 software now includes the new PAX2A panel meter. In addition to the easy front panel key programming of the PAX2A, you can now program the meter with simple mouse clicks and drop down menus via the built-in USB port.

Eight simple programming windows step you through various parameters such as input set-up, display format, and output control, just to name a few. The program file can be saved on a computer allowing for later recall. You can also extract an existing program from a meter and save it. The program can then be downloaded to other meters, making duplicate setups a breeze.